After two days of frustration the final day came up trumps with blue skies and a steady 8 knots of breeze, initially from ENE but tracking E as the morning wore on. The objective was to get four races to give a total of nine completed for the Gul B14 Championship supported by Bays Brewery and Seavolution. An awkward swell/slop/chop combination made for a challenging day, especially for the crews on the foredeck who were treated to regular cooling irrigation.

Race 6 started with a slight dash of pin end bias. Multiple World and National champion Tim Harrison, now sailing with his wife Anna Marriott, lined up for a trademark port tack start but thought better of it with less than a minute to go. The early leaders all came from the left with Trunky (Kathy Sherratt/Josh Wilce) leading at the top from Harrison/Marriott & Blue Badge (Mike Bees/ Pete Nicholson). On the 2nd beat Tim & Anna hit hard left again to jump into the lead at the top mark. Blue Badge gybed on top of Trunky down the final run to nick 2nd. Championship organiser and Margarita-master Tony Blackmore & crew Super-Meg put together a great race to take 4th from Abacus(Crispin Taylor/Gi Harrill).

Race 7 mixed it up a bit with the Torquay right-hand track is establishing itself. Peter Knight and Alex made the early running, in fact they made all but the very late running when Blue Badge rolled over them on the way into the finish. Tony & Super Meg went one better and took 3rd ahead of Tim & Anna with Simon & Nikki Hadley kicking of a run of top 10 results in 5th.

Race 8 resulted in a general recall at the first attempt, but got away cleanly on the restart. Blue Badge locked into the right hand groove early for another win, with Trunky keeping them honest in second ahead of Brightmile (Mark Watts & Matt Johnson) who were having a bit of a mare with assorted random never-had-that-happen-before spinnaker issues. Peter & Alex (4th) and Tim & Anna (5th) continued good runs to pull themselves up the overall leader board.

This left Blue Badge in the overall winners seat, but not entirely trusting their maths they stayed out for the final race and a last dose of Torbay sunshine.

Race 9 then was to decide the remaining overall places on the leaderboard. Blue Badge, with the pressure off, again hit the right to lead around the top from Trunky and Brightmile (or was it the other way around?) who were having an intra-family battle for 2nd overall. On the 2nd beat the breeze started to soften. Blue Badge appeared to throw the bucket out the back (or possibly had snagged some of the weed which was floating around in some quantity) and fell into the clutches of the chasing fleet. Trunky led around the top but was rolled by Blue Badge on the hoist, with Brightmile 3rd. Blue Badge gybed early on extended a little for another win, just ahead of Trunky. Brightmile had a that's-only-ever-happened-once-before-and-that-was-earlier-today random spinnaker issue and dropped back. Peter & Alex eagerly snapped up 4th place followed by another 5th place for the Hadleys.

All this left Blue Badge as overall winners, followed by Trunky and Brightmile. Steve Hollingsworth & Elliott Holman had a disappointing day to drop to 4th overall ahead of Tim & Anna. 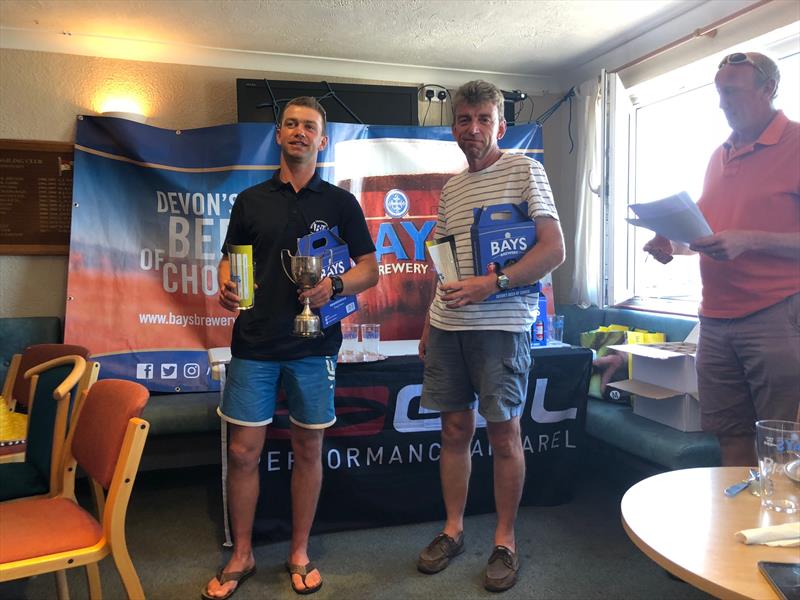 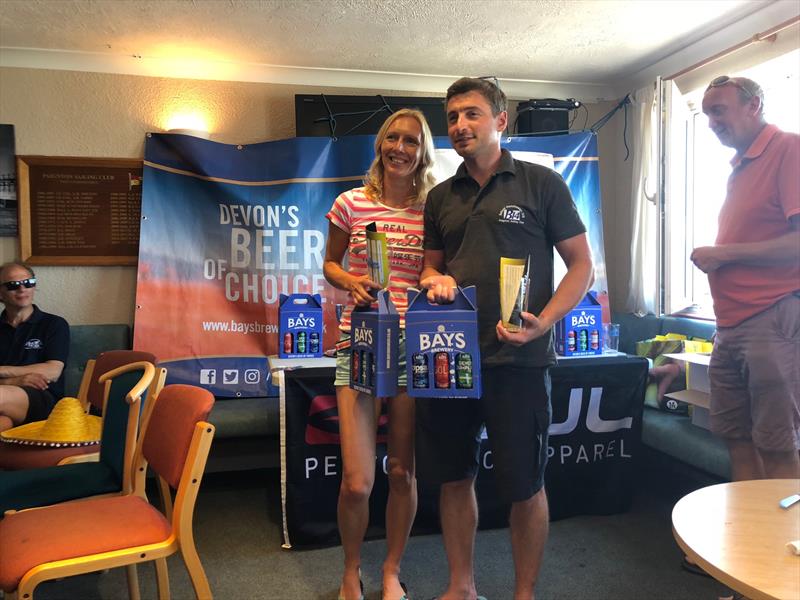 Winners of the 'classic' fleet for pre-Ovington hulls were Alicia Clifford and Charlie Hadley, ahead of Ben Lloyd-King and Jez Page (who unfortunately missed the final 2 races with gear failure) and Patrick Seyler & Stacey Bray.

Best newcomers (attending their first championship) were Mattias Lange and Helge Ludwig all the way from Blankeneser Segal Club in Germany. 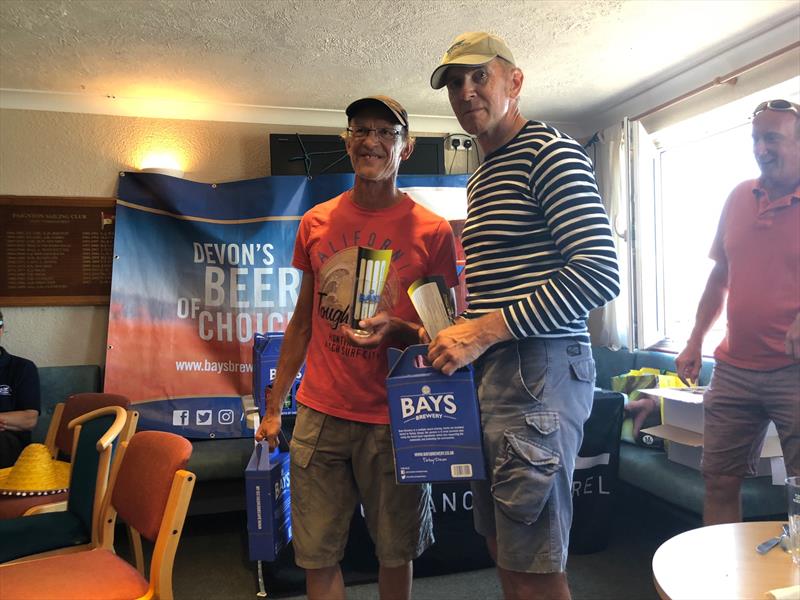 The B14 fleet would like to extend a huge vote of thanks to all of Paignton Sailing Club for putting on a great event. Race officers Ian Bullock and James Ripley along with their team did a superb job in some very trying conditions. Jane & Calvin in the kitchen turned out huge quantities of lovely food. Simon & Katie in the bar went above & beyond the call of duty by going out to buy bottles of Sambuca and on request and worked tirelessly well into the night. The beach team led by Arthur made sure we all remembered our tallies, and put a lot of effort into lugging our trolleys up and down the sand to make our life easy.

Overall Results:
If you finished in the top ten at the B14 nationals then enter your Gear Guide information here 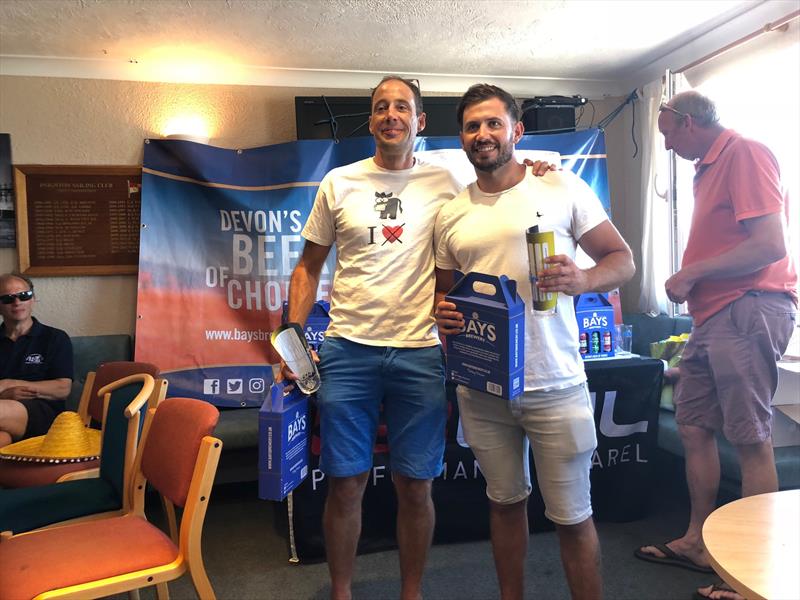 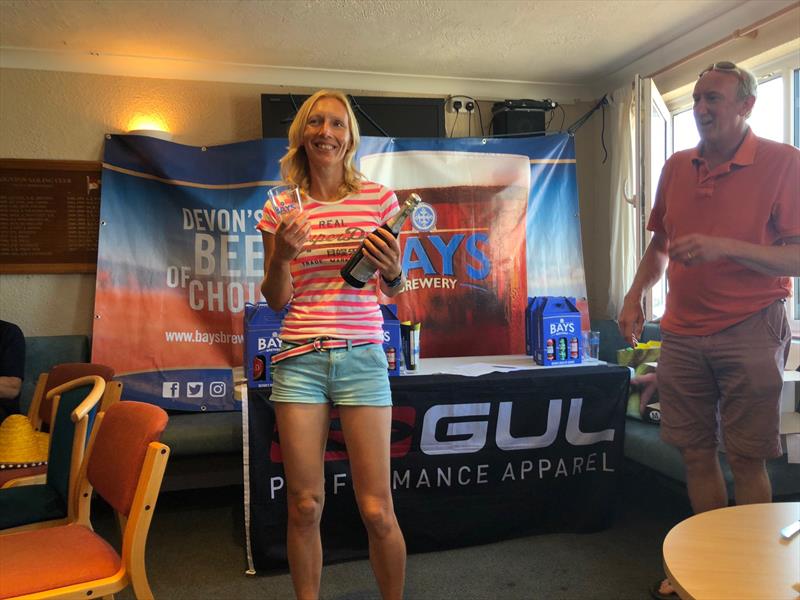 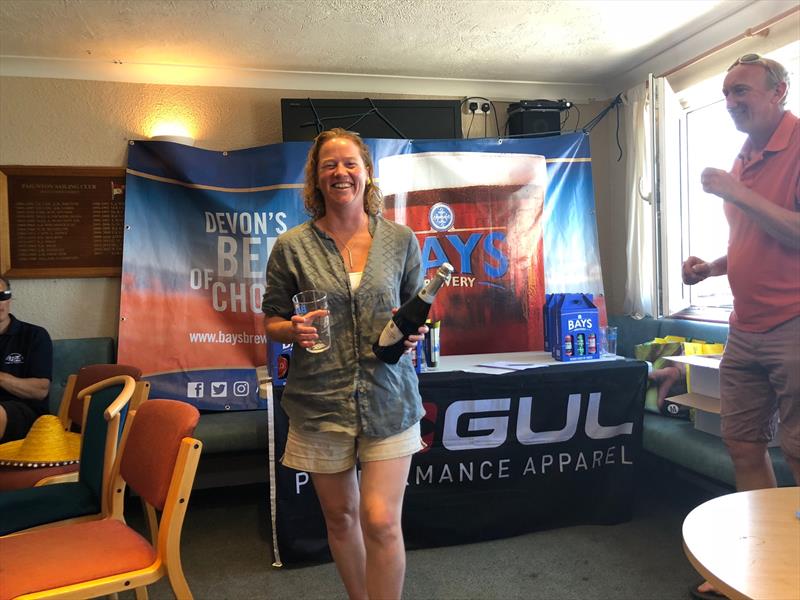